The Dicentra canadensis, known to most of us by the more intriguing name of Squirrel Corn, is a perennial native to the deciduous hardwood forests and woodlands of the eastern regions of North America. The Squirrel Corn is known for its unique and, at times, bizarrely shaped root network that gives the plant its name, or at least part of its name. The tangle of roots ends in clusters of yellow nodules, resembling a kernel of corn. 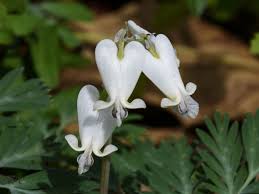 However, we don't look at flowering plants for their hearts, and the blooms of the Squirrel Corn don't disappoint. The beautiful flowers of the 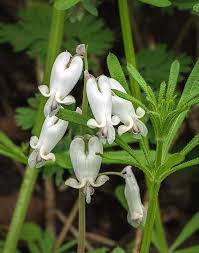 Squirrel Corn has triangular leaves that can grow up to 9 inches in length and divide multiple times, creating a delicate, lace-like pattern. The leaves are generally smooth with a waxy underside. The Squirrel Corn has been considered an at-risk species due to invasive predators like the earthworm. The plants can grow to a height of 1 foot, providing an eye-catching height for most gardens. Squirrel Corn also closely resembles its cousins, the Bleeding Heart and the Dutchmen's Breeches.

The chemicals the make up the Squirrel Corn plant are, as with many garden plants, toxic to mammals if consumed in large quantities. Ants, however, are safe from this plant, and the tiny insects partner with the Squirrel Corn, as with the Dutchmen's Breeches, to help disseminate its seeds. Ants are attracted to the grain movement between plant and anthill, which has allowed this plant to flourish and spread in its natural environment.